HOPE IN AN EMPTY CITY 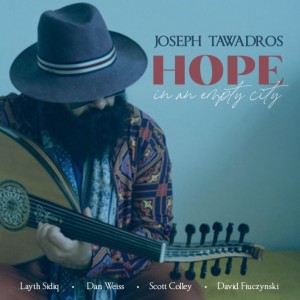 “Before COVD hit, I ventured into a New York studio with four innovative musicians and we came up with some solid, quite surprising tracks –  flavoured with Middle Eastern and jazz elements – and creating a lush, spacious organic sound, quite unlike my previous albums,”

“The album is very eclectic, with fast-paced numbers, blues and jazz grooves, slow and meditative pieces and some of my more contemplative solo oud improvisation. It has been a real journey of emotions and genres as I wrote then played these new pieces with the band and I’m delighted with the result. It’s an adventurous recording for me and I hope it will add a little something to the musical landscape.” Joseph Tawadros

This is a new band for Joseph, with four well-established players coming together for the first time. The music was written specifically for this ensemble and each player has brought his own experience and nuance to the pieces.

Jordanian violinist Layth Sidiq, like Joseph, was brought up immersed in Arabic music yet is also comfortable in any genre, bringing flavours of jazz, classical, folk and world music to the tunes. Joseph and Layth together are a real highlight of the sound, bringing an authentic Middle Eastern strength to Hope in An Empty City, emphasising Joseph’s deep sense of melody drawn from those eastern traditions.

Layth is an award-winning violinist, composer and educator and is director of both the Arab Music Ensemble at Tufts University and the Center for Arabic Culture’s Youth Orchestra Program in Boston.

With the solid rhythm section of Scott Colley, double bass and Dan Weiss, drums, this is a novel direction for Joseph – with a drum kit rather than traditional Arabic percussion. It adds a different dimension to his music resulting in an organic, spacious jazz-inflected sound.  Dan Weiss is an adventurous player with deep skills in world music rhythms, whose innovative drumming consistently pushes musical limits.

Scott Colley – a jazz player and four times Grammy nominee, has been described as, “One of the leading bassists of our post-bop era, and a composer-bandleader of quietly serious resolve,” by The New York Times.

David ‘Fuze’ Fiuczynski is an “iconoclastic innovator and a rebel with a guitar”. Fluent in funk, rock, fusion, he plays a unique fretless guitar, with which he can match Joseph’s more glissando phrases. In fact, all the stringed instruments on this album are fretless.

There’s a distinctive individual energy from each player as they come together creating a new sound for Joseph’s compositions with a cinematic breadth that will take listeners on an evocative and emotional musical adventure.

Listen to the album