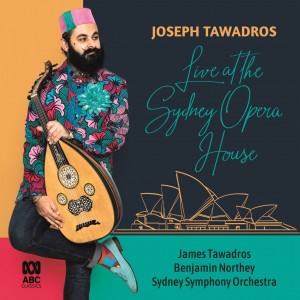 “The multi-award winning Tawadros has made a career of blurring the boundaries between middle-eastern classical music, contemporary jazz and Western classical music, and is known for his easy-going stage presence and quick-witted banter – all of which he brought to the Opera House in spades in this concert with the Sydney Symphony Orchestra… “A warm-hearted concert that was, quite simply, loads of fun.”
– Angus McPherson, Limelight Magazine

Joseph Tawadros and the Sydney Symphony Orchestra embark upon an extraordinary journey on their new album, Live at the Sydney Opera House.

Tawadros is one of Australian music’s most impressive and colourful characters, a composer, improviser and storyteller who has won four ARIA Awards (with a further 12 nominations) over the course of a fascinating and wide-ranging career. Tawadros has taken the unique sound and qualities of the oud – a Middle Eastern lute– and adapted it to the worlds of jazz, classical and world music to create unique and compelling original music.

Recorded live in concert in June 2019, this album features the world premiere of Tawadros’ own Concerto for Oud and Orchestra alongside works from throughout his career. It also marks the first time that Tawadros has released an album with a full symphony orchestra, demonstrating both the extraordinary textures of the oud itself as well as its rich and complex interactions with the orchestra’s many instruments.

The result is a thrilling album, cinematic in scope and full of drama. At times meditative and at others exhilarating, it stands at the crossroads of East and West, of tradition and innovation, this is an album unlike anything you have ever heard before.