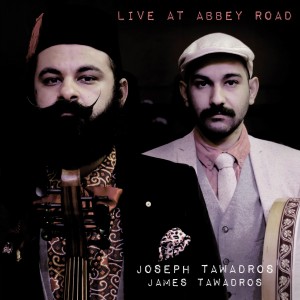 “One of the most impressive musicians to emerge in Australia, with a dazzling technique dispensing hair-raising tempo.  His writing displays a real depth of emotion … revelling in a zest for life and celebration.” – The Australian

London based Oud virtuoso and triple ARIA Award winner, Joseph Tawadros AM, and his percussionist brother James have recorded an extraordinary live, improvised album at Abbey Road studios, London in March, to be released on July 12th, 2017.

The Oud is an Arabic lute, the Req is an Egyptian tambourine and the Bendir a frame-drum. These traditional instruments are often together, but are given a startling contemporary workout – that runs the full gamut of emotional and musical range in the Egyptian-Australian brothers’ hands.

“I love the tradition, that’s what inspires me, but I’m not here to conform. I’m here to be myself, honour my ancestors and play my part.” Joseph Tawadros

Many of the 29 tracks on Live at Abbey Road were created and improvised on the spot, in the moment, capturing the spirit and energy connecting two virtuosic musicians.  In the studio, the brothers communicated through just the notes they played and familiarity with each other’s craft, drawing from and moving well past the Egyptian music traditions they were steeped in since childhood and many years performing together.

“James plays Req like no one else and his vision and sensitivity add so much. He has an incredible ability to read and predict moments when we improvise and that musical connection is scary at times.” Joseph Tawadros

Joseph has generated from the oud, some intriguing, truly innovative sounds and textures.  He developed these techniques while composing his Concerto for Oud and Orchestra, which was premiered by Melbourne Symphony Orchestra in May this year.

Joseph and James, at 33 and 28 years old, use the traditions of Egyptian music as a sturdy building block from which they springboard into new musical adventures, bringing contemporary vitality to the art form.

Track 19 ‘Constellation’ – where different techniques and textures transform the oud into many voices. You might hear moments of slide guitar, banjo and mandolin from the one ancient instrument.

“It’s not just musical interplay, but the interplay of two souls through whatever force has chosen us for that moment to be sonically realised. So we submit to freedom, with an armoury of technique, spirit and love.” Joseph Tawadros.

LIVE AT ABBEY ROAD by Joseph Tawadros and James Tawadros

available through MGM www.thegroovemerchants.com and iTunes

‘Live at Abbey Road’ by Joseph Tawadros and James Tawadros

Track 1 Four Sols. Sol is the note G. Here I use an original Oud tuning I’ve been developing. Two of the lower strings are tuned to G (one below middle C; the other 2 octaves below middle C). The highest string is pulled up from F to a G, giving the Oud 4 strings tuned to G in four octaves. This tuning makes it is easier creating call and response passages and having the G in four octaves adds colour and texture. This tuning allows the lower strings to play melodies in octaves together. You can hear this tuning on another track, Seba Metal. Four Sols is about interplay and widening the Oud’s lower and higher range. The entry of James with the Req later in the piece makes for an exciting rhythmic interplay between the octaves and the percussion.

Track 7 African Sky features another technique I’ve developed where I play the same note in the same register with one as an open string and one as a fingered note. It creates an interesting type of African kora style sound on a fretless instrument. This piece makes me feel I’m in Upper Egypt drifting down a river on a felucca, the next minute watching a waterfall, another minute looking up to the sky gazing at the stars. It’s a journey with so many stories and James adds a beautiful dimension.

Track 19 Constellation. I’m using several new techniques and textures and the Oud transforms into many different voices. You can hear moments of slide guitar and banjo as well as mandolin. I’ve always felt the oud was more than a monophonic instrument and I try and demonstrate it here, with chordal accompaniment and harmonics drifting in and out of melody but always with the goal of maintaining the Oud’s timbrel integrity.

Track 21 Father, Where Art Thou? is a pure improvisation. The studio was dark and I thought of my Father. I let go into space, thoughtless. I found myself on E Phrygian but my finger wanted to add an F# and you hear each phrase being interrupted by this note. This note is like a dagger and I found the more it repeated, the sadder I got. It hurt but created a beautiful and sweet melancholy. This is definitely on of my favourite tracks and I remember recording it vividly – my closed eyes swelling with tears. I think this is as raw as my playing gets.

Track 22 That Night, That Room ‘uses the same theme from ‘Father, where art thou’ in a rhythmic form – still will that F# sliding between phrases. The piece moves from E Phrygian to the very Arabic Bayatti Mode. In E it is low and dark but has a masculine sound which represents my father. There’s authority but gentleness. It then finishes on the sad Seba mode, quite aggressively but finishing with a single gentle E as a sweet cadence.

Track 14 Yet We Still Continue, implements the same technique as African Sky, with that Kora sound but in C minor.

Track 16 In Search of Home starts atonally with no set Mode, and I travel through unrelated modes and chords, while James follows me on a rhythm repeating each phrase and pre-empting some phrases until I settle on one mode, then the piece develops melodically and rhythmically.

There are fragile moments and a wide range of dynamics. There’s a lot of lament, anger in parts (mostly in the lower register). There’s a cry but moments of belief and hope. We’re lost souls looking for home…

How is Live at Abbey Road different to your previous albums?

Well, the level of improvisation – which brings out the freshness and energy between two musical kindred spirits. I always go into my album recording sessions with highly structured outlines and pieces. But for this album, many of the pieces were created on the spot; others were extrapolated from a few phrases or concepts I’d been working on . We had 6 hours in the studio, recorded 4.5hours and this is the best of what we could fit into 78 minutes.

The Oud and Req are a common pairing in Traditional Middle Eastern music but I think this album will surprise many who are used to this pairing. Some tracks don’t move too much away … but other tracks use tradition as building blocks to move somewhere else. We want to bring something new to this art form.

James plays Req like no one else and his vision and sensitivity add so much to the music. I always want to surprise people on the Oud and I hope this does so even in a more traditional pairing.

I loved recording these pieces with just James – he is a virtuoso player and he has an incredible ability to read and predict moments when we improvise. We have an amazing musical connection – which is scary at times.

At times it felt we were at the call of whatever force had chosen us to be sonically realised, for that moment – and we simply submitted to freedom with an armoury of technique, spirit and love. It’s a celebration of human connection in that way and I’m hoping people feel that – that it’s as much about them as it is about us – and being true to the moment.

How did your Concerto for Oud and Orchestra influence these pieces?

It’s great this album was recorded around the time I was working on the concerto (early 2017). There’s definitely a lot of influence of the concerto in this recording – not so much melodically but texturally. The concerto is a technically demanding piece and practicing for that, I feel, has improved my technique and creativity.

LIVE AT ABBEY ROAD by Joseph Tawadros and James Tawadros