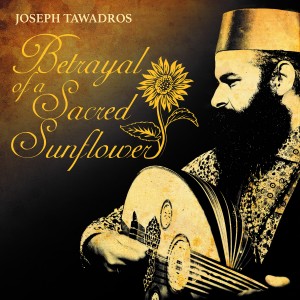 New album Betrayal of a Sacred Sunflower out now

Oud virtuoso and composer Joseph Tawadros AM, returns after his breakthrough season in June when his Concerto for Oud & Orchestra with Sydney Symphony Orchestra filled Sydney Opera House for 3 nights and gained rave reviews. The 2019 Australian spring tour includes five regional venues in NSW and VIC as well as Melbourne and Sydney.

“The multi-award winning Tawadros has made a career of blurring the boundaries between middle-eastern classical music, contemporary jazz and Western classical music, and is known for his easy-going stage presence and quick-witted banter – all of which he brought to the Opera House in spades in this concert with the Sydney Symphony Orchestra”. Limelight Magazine June 2018Joseph Tawadros is one of Australian music’s most impressive and charismatic figures: a composer, improviser, storyteller as well as a brilliant exponent of the oud, the Egyptian lute. Tawadros’s virtuoso technique and adventurous curiosity blends world music, jazz and classical seamlessly and shows his skills in contemporary genres as well as traditional Arabic inspired pieces. Joseph creates music that transcends labels and crosses borders.

“For this album I wanted to explore silences. It’s about restraint, surrounding myself with artists that know more about space than I do, exploring where could go in that context.”

Much of the album is minimalist and spacious in approach with long lingering notes, giving the listener space to dream and to evoke images and impressions from their own imagination. The interplay between the instruments has a sensitivity that allows the oud’s signature phrases to shine through.

BIOGRAPHY
Joseph Tawadros AM is a multi- award-winning virtuoso player of the Oud, a Middle Eastern lute.

Joseph’s music has brought Middle Eastern, classical and contemporary jazz together seamlessly and he is considered by peers and music critics to be a truly original performer and an innovative composer.

On stage Joseph is more than just a brilliant musician: He is an engaging and articulate storyteller with quick humour and astute observations. His charismatic style brings another dimension to the performance.

Born in Cairo in 1983 and brought up on Sydney, Joseph brings a musical tradition inherited from his grandfather, Mansi Habib, a composer who played oud and violin, and his uncle, Yacoub Mansi Habib, a fine Egyptian trumpet player.

Joseph was awarded the Order of Australia (AM) in 2016 for significant service to music as an accomplished oud performer, composer and recording artist.

Joseph has recorded 16 albums of original music, with 14 ARIA nominations. He has received four ARIA Awards (Best World Music Album and Best Soundtrack Album).  His most recent album is Betrayal of a Sacred Sunflower released in July 2019. Joseph performs as a soloist or with his brother (virtuoso Egyptian percussionist James Tawadros) with his jazz group and a range of orchestras and other collaborators.

“… He strongly believes the oud “is capable of saying something in different genres and cultures”. He is clearly a highly accomplished musician, and his phenomenal virtuosity allows him to turn the oud into a Spanish guitar, a rock guitar and even a banjo, as well as showing off the instrument’s Arabic roots.” Bachtrack UK 2018

“…one of the most interesting and important musicians in Australia.” Murray Black, Richard Glover show ABC Sydney 2019

“Certainly Tawadros is not averse to showmanship … but that tendency was completely overridden by his profound instinct for making music that is a mirror of truth; a bridge between his heart and mind and those of his listeners.” Sydney Morning Herald 2017

“This Egyptian oudist is a master of his field… the encore itself raised the energy levels with its new heights of virtuosity, lightning finger work and rhythmic strumming… A perfect conclusion to a performance that was all about challenging perceptions – of culture, identity and, of course, the oud itself.   BachTrack UK review – BBC Proms 2018

“One of the most impressive musicians to emerge in Australia … with a dazzling technique dispensing hair-raising tempos… His writing displays a real depth of emotion …reveling in a zest for life and celebration.” – The Australian